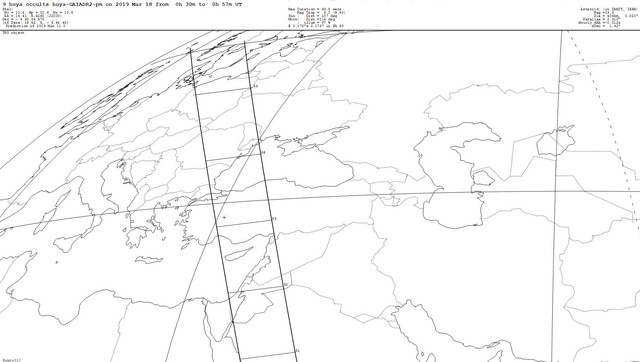 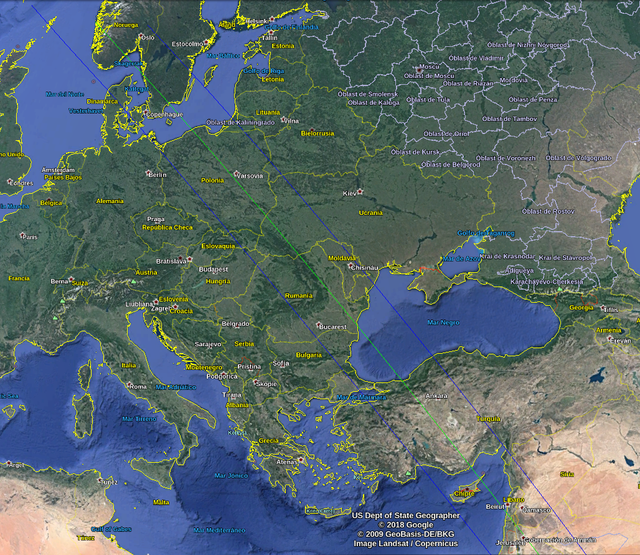 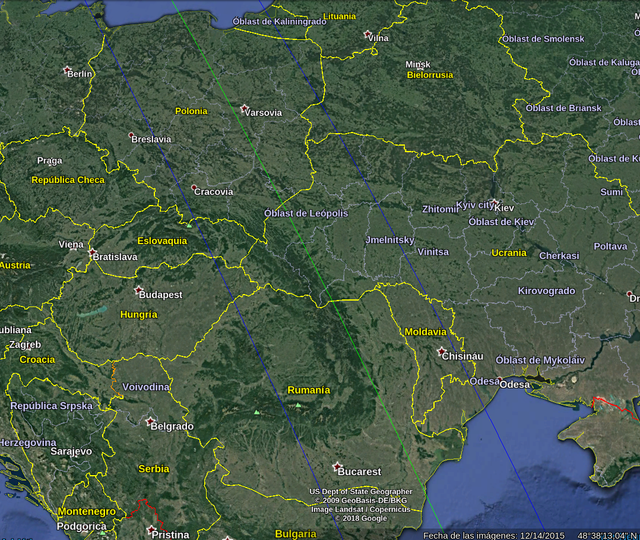 "I have generated a preliminary elliptical fit to the shape of Huya that I am attaching (North is up, East to the left). In my attached fit I have removed the scale in kilometers and the observers legend. The data is still under analysis.
The occultation was observed from 50 sites (involving more than 50 people, including professional -from professional observatories- and amateur astronomers). From this 50 sites 21 recorded a positive occultation.
Occultations by TNOs are really rare, and involving an occulted star so bright (about 10 mag) are even more rare. Usually we catch occultations by TNOs in the range 16-18 mag for the occulted stars, for this events we can predict now about 5-10 per month, but we catch positive around only 1 per month (in the best cases). This is the first stellar occultation by Huya, and a record in terms of the number of positive detections! The first stellar occultation by a TNO was detected in 2009 (2002TX300) and up to date we have detected 70 stellar occultations by TNOs/Centaurs (43 by 24 TNOs, and 27 by 5 Centaurs), and we have participated in more than 90% of them! The work to predict one of this occultations is really hard, and can last for years in some cases, due to the high uncertainties in the orbits of the TNOs and the small angular size of these bodies in the plane of the sky (GAIA DR2 is helping a lot, with a very accurate position of the stars)." 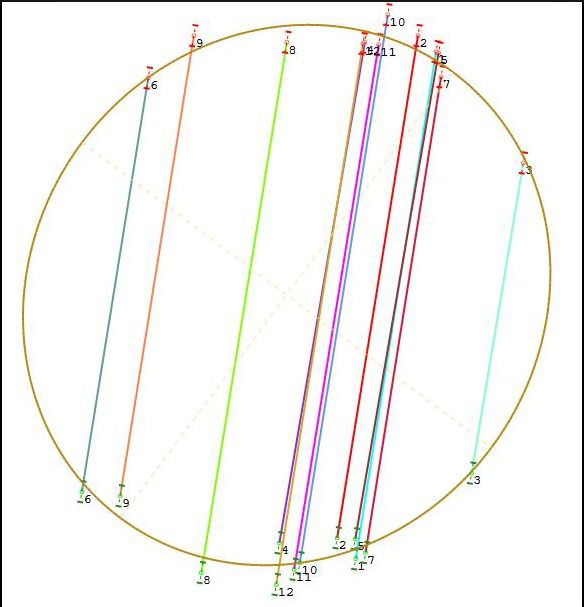 I am contacting you because there will be an interesting occultation
by the large Transneptunian Object named Quaoar, on May 28th at ~23:40
UT, favorable for a large part of Europe. You participated in the very
successful Haumea event in 2017 and we need a large effort for the
Quaoar event, with similar equipment if we want to succeed.

The prediction is very accurate, with an uncertainty of only a few
milliarcseconds. The main scientific goal in this case is to try to
find an atmosphere. Quaoar is one of the few TNOs with the potential
to host a tenuous atmosphere, either global or local. Detecting an
atmosphere in a TNO other than Pluto would be a very important
scientific breakthrough with the potential for a high impact
publication. Also, we will be able to determine an accurate size and
shape, and a good geometric albedo to improve our knowledge of this
TNO. Quaoar has a satellite named Weywot and we might detect it in the
occultation as well, but currently its position is not well known. The
probability to detect the satellite occultation is low, but one never
knows. We do not expect to find rings in this case, but again, we
might find surprises...

The event will be somewhat challenging because the occultation star is
not bright (it is 16.9 mag) and it will be low in the sky for most
locations. The good thing compared to the occultation by Haumea in
2017 is the fact that the occultation drop will be more than 2
magnitudes, so even with a low signal to noise ratio, the event can be
detected.

An important issue here is that in order to try to detect an
atmosphere, we need to sample the ingress and egress with enough time
resolution in order to record a gradual occultation (which is what an
atmosphere would cause). Therefore, integration times should be in the
order of 1s. Usually, for atmosphereless bodies we request
observations with integration times such that they are around 2 to 4
times the readout time, but in this case our main driver is to try to
find an atmosphere so we are particularly interested in short
integration times. The event will take place at around 23:40 UT, and
this is accurately determined to withing a couple of minutes, but
observing at least ~15 minutes prior and after the nominal time is
recommended for several reasons.

We are preparing a large campaign and several ~1m class telescopes in
France, Germany, Austria, etc will be participating but weather and
technical problems can ruin all our plans... Your participation will
thus be very important, and the more chords we can detect, the better.

Attached are two zoomed maps with the two most extreme shadow paths
that we are expecting. Probably, the final path will be in between
those two paths. The maps also contain the star coordinates, its
magnitude, the occultation time and the basic info that you need to
arrange the observations. But you can find further information and
star maps on this link

Please let us know who will be participating. But please do not do
"reply to all" in order to not generate too much email exchange (note
that we are more than 80 people in this list). Just reply to me with
cc to ххх@iaa.es and ххх@gmail.com Also, if you have
questions, please do not hesitate to contact us. You may have
received this through the planoccult list as well. If that was the
case, my apologies for the duplication, but I think it is important to
emphasize the good potential of this event.

Like in previous occultations by TNOs, note that we are carrying out
this campaing within the "Lucky Star" umbrella. Lucky Star is an
EU-funded research activity that agglomerates the efforts of the
Paris, Granada and Rio teams. So you may be contacted by different
people of these three teams, but we are working together.