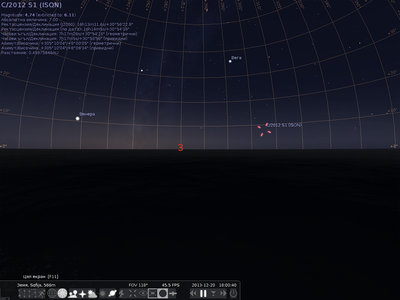 When in doubt: C8

And it all started with simply looking up. Always look up, every chance you get. There’s a whole Universe out there waiting to be explored.
Phil Plait
Нагоре This image from NASA's Solar Dynamics Observatory shows the sun, but no Comet ISON was seen. A white plus sign shows where the Comet should have appeared. It is likely that the comet did not survive the trip.

These images from NASA's Solar Terrestrial Relations Observatory and the ESA/NASA Solar and Heliospheric Observatory show Comet ISON growing dim as it made the journey around the sun. The comet is believed to have broken up and evaporated.

And it all started with simply looking up. Always look up, every chance you get. There’s a whole Universe out there waiting to be explored.
Phil Plait
Нагоре

и това: "Give us three or so weeks at least to (hopefully) get Hubble images to say if there's anything left of ISON, and how much, if so. Then expect results from the Comet ISON Observing Campaign to continue appearing for at least, oh, five years? Maybe ten..."
Последна промяна от viktor на съб ное 30, 2013 14:16, променено общо 4 пъти.
GSO Plossl 4mm
GSO Plossl 42mm
SkyWatcher Plossl 10mm
SkyWatcher Plossl 25mm
Нагоре 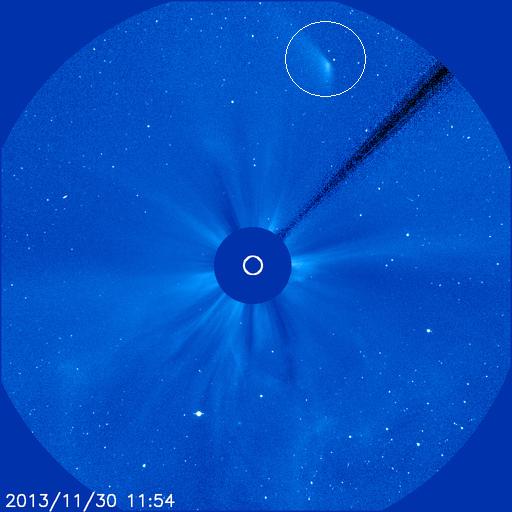 It was expected to be a great comet as it approached to the sun down to only 0.01 A.U. on Nov. 28. It brightened up to -2.5 mag at best. However, it rapidly faded out at the perihelion passage. It was 2-3 mag just after the perihelion passage (Nov. 29). In the Northern Hemisphere, it will appear in the morning sky again soon. It approaches to the earth down to 0.4 A.U. from mid December to early January, and it will be observable in excellent condition in the Northern Hemisphere. Probably the dust remnant will be visible around 8-9 mag. It is not observable in the Southern Hemisphere. 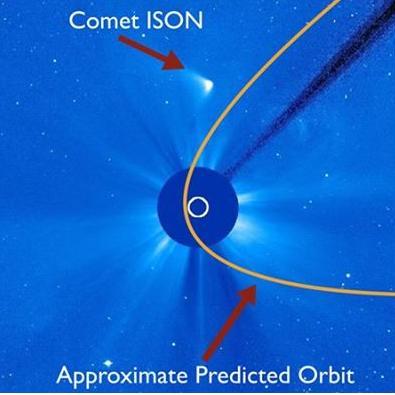 
The comet's nucleus apparently disrupted near perihelion, with the
comet's head fading from perhaps a peak brightness of visual mag -2 some
hours before perihelion to well below mag +1 before perihelion. M.
Knight, Lowell Observatory, finds that the comet peaked around visual
mag -2.0 around Nov. 28.1 UT, adding that the brightest feature in the
coma of the comet faded steadily after perihelion from about mag 3.1 in
a 95"-radius aperture when the comet first appeared from behind the SOHO
coronagraph occulting disk on Nov. 28.92 to about mag 6.5 on Nov.
29.98. K. Battams, Naval Research Laboratory, writes that, based on the
most recent LASCO C3 images (Nov. 30.912 UT), there is no visible
nucleus or central condensation; what remains is very diffuse, largely
transparent to background stars, and fading; it appears that basically a
cloud of dust remains from the nucleus. S. Nakano, Sumoto, Japan,
writes that he measured the comet's total magnitude in a 27' photometric
aperture from the SOHO C3 camera images to be as follows: Nov. 29.383,
0.5; 29.755, 1.4; 30.013, 2.0; 30.496, 3.0; 30.883, 5.4.

Z. Sekanina, Jet Propulsion Laboratory, reports that, from the
position of the northeastern boundary of the comet's fan-shaped tail in
three images taken with the C3 coronagraph onboard the SOHO spacecraft
between 0.7 and 1.9 days after perihelion (Nov. 29.46 to 30.66 UT), he
finds that the comet's production of dust terminated about 3 hours
before perihelion. Although this result is preliminary, it is unlikely
to be significantly in error, because the position angles of a
perihelion emission are off in the three images by 14-22 deg, and those
of post-perihelion emissions still more. The peak radiation-pressure
accelerations derived from the tail boundary's angular lengths
(estimated at 1.8-2.5 deg) are about 0.1-0.2 the solar gravitational
acceleration, implying the presence of micron-sized particles. The
estimated time of terminated activity is consistent with the absence of
any feature that could be interpreted as a condensation around an active
nucleus in the 20 or so images taken with the C2 coronagraph on Nov.
28.8-29.0 UT (0.8 to 5.4 hr after perihelion) and with the appearance of
a very sharp tip (replacing a rounded head) at the comet's sunward end
in the C2 images starting about 4 hr before perihelion and continuing
until its disappearance behind the occulting disc around Nov. 28.74 UT
(or some 50 minutes before perihelion). The time of terminated activity
is here interpreted as the end of nuclear fragmentation, a process that
is likely to have begun shortly before a sudden surge of brightness that
peaked nearly 12 hr prior to perihelion. Fine dust particles released
before perihelion moved in hyperbolic orbits with perihelion distances
greater than is the comet's, thus helping some of them survive. The
post-perihelion tail's southern, sunward-pointing boundary consists of
dust ejected during the pre-perihelion brightening. However, the
streamer of massive grains ejected at extremely large heliocentric
distances, so prominently seen trailing the nucleus along the orbit
before perihelion (cf.CBET 3722), completely disappeared. The dust
located inside the fan, between both boundaries, was released in
intervening times, mostly during the last two days before perihelion.
The strong forward-scattering effect (phase angles near 120-130 deg) has
tempered the rate of post-perihelion fading of the comet, but the
merciless inverse-square power law of increasing heliocentric distance
is necessarily the dominant factor in the comet's forthcoming gradual
disappearance.

H. Boehnhardt, J. B. Vincent, C. Chifu, B. Inhester, N. Oklay, B.
Podlipnik, C. Snodgrass, and C. Tubiana, Max Planck Institute for Solar
System Research, Katlenburg-Lindau, reports that two diffuse tail
structures were analyzed in post-perihelion images obtained by the
LASCO-C3 corongraph onboard the SOHO spacecraft between Nov. 29.60 and
29.81 UT. The southward tail extended toward p.a. about 167 deg to
about 0.4 deg distance from the central brightness peak. The eastward
tail had an approximate position angle of 68 deg and extended to at
least 1.2 deg distance. By Finson-Probstein simulations, the eastward
tail can best be interpretated as being caused by a dust release about 1
hr around perihelion. The maximum beta value in the eastward tail
reaches values up to 1.5, typical for graphite or metallic grains of
about 0.1 micron radius. No indications are found for a continuation of
the release of similar dust after 2 hr post-perihelion. The shorter
southward tail may be a relict of heavier grains released about 1-2 days
before perihelion passage. Diffuse cometary material is noticeable in
the p.a. range covered by the two dust tails. The match of the
synchrone pattern for the eastward tail is not optimal, which may
indicate secondary effects to the dust grains involved.

Born in a dusty and turbulent environment, comet ISON spent its early years being jostled and struck by siblings both large and small. Surviving a particularly violent first few million years, ISON retreated to the Oort Cloud, where it maintained a largely reclusive existence for nearly four billion years. But around 3-million B.C., a chance encounter with a passing star coerced ISON into undertaking a pioneering career as a Sungrazer. On September 21, 2012, ISON made itself known to us, and allowed us to catalog the most extraordinary part of its spectacular vocational calling.

Never one to follow convention, ISON lived a dynamic and unpredictable life, alternating between periods of quiet reflection and violent outburst. However, its toughened exterior belied a complex and delicate inner working that only now we are just beginning to understand. In late 2013, Comet ISON demonstrated not only its true beauty but a surprising turn of speed as it reached its career defining moment in the inner solar system. Tragically, on November 28, 2013, ISON's tenacious ambition outweighed its ability, and our shining green candle in the solar wind began to burn out.

Survived by approximately several trillion siblings, Comet ISON leaves behind an unprecedented legacy for astronomers, and the eternal gratitude of an enthralled global audience. In ISON's memory, donations are encouraged to your local astronomy club, observatory or charity that supports STEM and science outreach programs for children.


I can confirm your recent observation :

C/2012 S1 (ISON):
2013 Dec. 7.26 UT: m1=7.2, Dia.=10', DC=1/, 20 cm SCT (77x).
[ The comet's remnant visually shows a near-elliptical area with
a slightly higher degree of condensation and 10' of major axis,
with geometric center located approximately at R.A.=16h11m.8,
Decl.=-1o45'.0, about 20' separation in declination respect to
the pre-perihelion ephemeris position. Two faint tail-like estructures
are observable, the best defined one along 0.3-deg in p.a. 310 deg,
and the other one appears shorter and directed towards p.a. 180 deg.
Nearby field stars checked in DSS. Comparison stars at the same low
altitude ( 7º ) as the comet. Observation made from mountain location,
with very good seeing and transparency down to the horizon ].

I measured the position of the ISON centroid against the predict iced
ephemeris on the LASCO C3 images 24 hours after perihelion, and the
agreement was around 6" . Haven't measured exactly against the last high
quality H1A fits, but it seems close to the nominal position. Should show
up in wide field images at least.